Miek: ‘Life is a macabre fairy-tale and its inhabitants are as wild beasts dressed in designer-outfits.’

Miek Uittenhout’s works is about desire and temptation, conquering and being conquered. Uittenhout uses the aesthetic language of images from fashion shows, Hollywood, design, pop culture and plastic arts. Her images are carried out with the greatest detail and she creates a seemingly innocent dream world. Ultimate desires seem to be in abundance, but appearances are deceptive. The audience is seduced but finally grabbed by the throat. Beauty becomes horror. Perfection becomes destruction.

Miek Uittenhout is both theatre director, photographer, designer and artist. Uittenhout’s image-factory will, aside from creating plays and performances, focus on photography, film and applied costume and set design. The artist’s desire for aesthetics on the one hand and her criticism of the dominance of the image in modern western society on the other hand, is an area of tension that is far from exhausted. Miek Uittenhout happily embraces her own ambiguity. She will continue to seduce her audience but at the same time assure her spectator that he will yet regret falling in the same trap again….

The objects Uittenhout designs form the basis of her plays and strive for perfection. She lures her audience with beauty and glamour. The audience is spoilt with a greedy wolverine of theatricality. With this Uittenhout meets the social trend in which outward perfection has become the standard. The artist plays with the frightening idea that man is slowly but surely losing its grip on reality. What happens when a dream world is preferred to reality? Striving for beautiful stories and happy ends is the true human tragedy, according to Uittenhout.

‘Others about Miek Uittenhout’s work: It is bittersweet, extravagant, sexy, styled, cross-over, amoral, daring, disturbing, megalomaniac, oppressing, in your face. It are glazed apples on a stick, crying muses, craving people and big eyes.’ 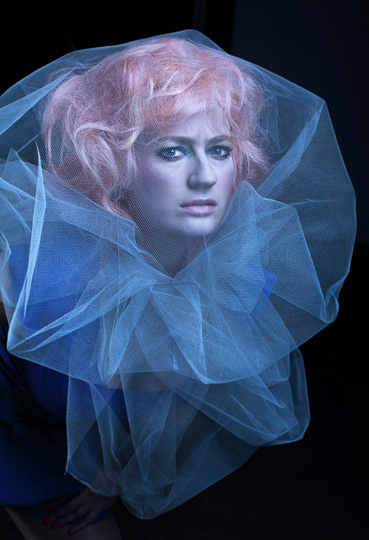